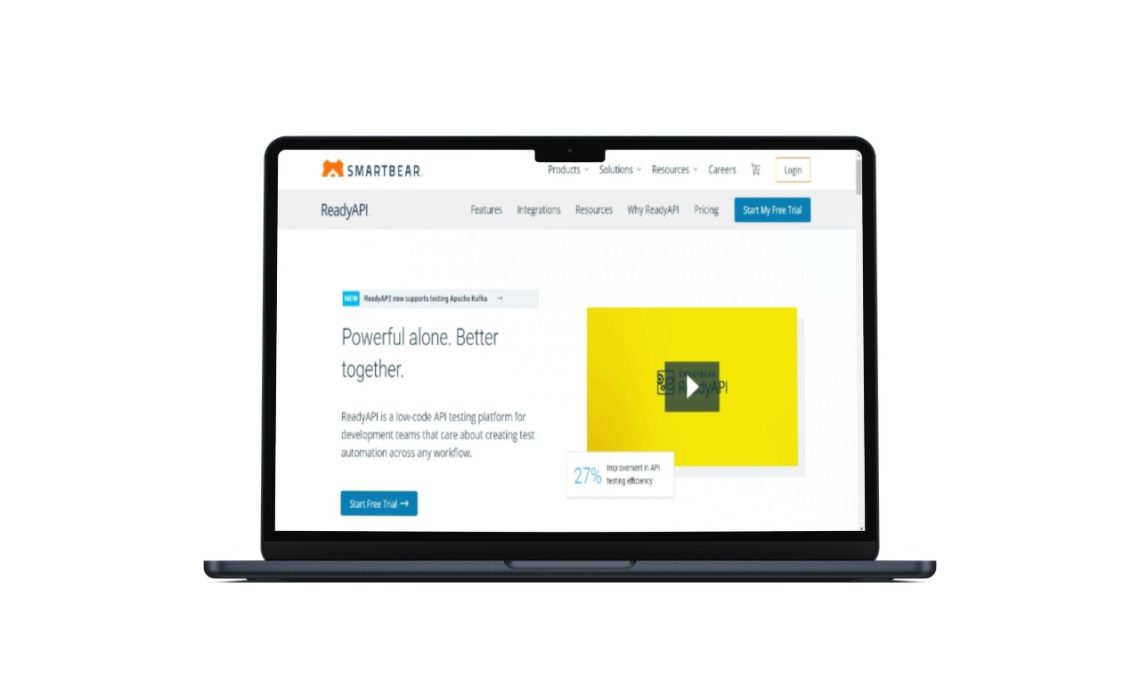 Application programming interface (API) is a critical aspect of software development. It allows your web app to communicate with data and other software systems. Most of the apps that you are using rely on interconnected API products. You need to ensure their proper operation. Otherwise, it can compromise the entire service. That’s why you need to find a good API testing tool. It will help you to quickly catch bugs with minimal human input. There are plenty of solutions available online. But which are the best API testing tools for 2022? In this article, you will find 10 of the top testing tools on the market. Let’s take a look at them.

ReadyAPI is the next-generation API testing platform. It supports automated API functional testing, load testing, and security testing. Hence, you get all the essential tools in a single platform. ReadyAPI is very easy to implement in any environment. It helps you to integrate API testing into your CI/CD pipeline during every build. It enables you to ensure end-to-end quality for all web services.

Katalon Studio is a hassle-free API testing tool. It enables you to simplify and automate tests for web services, applications, and mobile apps. Also, you can use it for exploratory testing. Besides, Katalon Studio is built for continuous testing. It allows you to seamlessly integrate the API into your ecosystem. Hence, you can transform automated testing into continuous testing

3. Postman – One Of The Most Popular API Testing Tools

Postman is an API development environment. It is divided into three parts: Collections, Workspaces, and Built-in Tools. With Postman Collections, you can run requests and tests. Also, you can efficiently debug code. Besides, it lets you effortlessly create automated tests. On the other hand, Postman workspace supports collaboration. Hence, you can share the Collections with your team. Finally, Postman offers built-in tools. They support every stage of the API lifecycle.

4. REST-Assured – One Of The Best API Testing Tools For Java

Testing and validating REST services in Java is harder than the dynamic languages, like Ruby and Groovy. This is where REST-Assured comes into play. It simplifies the testing of Java REST web services. REST-Assured is an open-source tool. Hence, you don’t have to spend a single penny to use it. Also, it is user-friendly. You don’t have to be an HTTP expert to use it. Overall, it is one of the best tools for testing APIs in Java.

5. JMeter – One Of The Most Popular Open-Source API Testing Tools

JMeter is an open-source tool. You can use it for functional API testing. Also, it helps you to perform load and performance testing. You can even use it as a unit testing tool for JDBC database connections. JMeter offers a wealth of functionalities. By using them, you can enhance the API testing process. Overall, it is one of the best API testing tools available online.

6. ACCELQ – One Of The Best Cloud-Based API Testing Tools

ACCELQ is a cloud-based continuous testing tool. It allows you to seamlessly automate API and web testing without writing any code. It can save you 70% of the cost associated with maintenance efforts. Thanks to the application of AI technology. ACCELQ intelligently adapts to unexpected changes. Hence, development and testing teams around the world love to use ACCELQ. Also, it heavily emphasizes on design and user experience. Hence, you will find it to be very intuitive and comprehensive. For these reasons, ACCELQ has become one of the top testing tools on the market.

7. Swagger.io – One Of The Best API Testing Tools For Functional API Testing

Swagger is a web-based API testing tool. It allows you to perform API security testing and functional testing. Also, it lets you perform API performance testing. Swagger helps you through every stage of the API lifecycle. It simplifies API development for users, teams, and enterprises. Because of this, it is regarded as one of the best API testing tools for 2022.

TestGrid is a lightweight API testing tool. It offers a minimalistic user interface design. It offers 70% faster performance than the traditional API automation process. As a result, you can test and release your application faster. Also, the API tool is very easy to use. It doesn’t have any pre-requisite of programming knowledge. As a result, it is recognized as one of the top API testing tools for 2022.

9. HttpMaster – One Of The Top API Testing Tools On The Market

HttpMaster is a tool for API testing and development. It can create batches of connected requests. Hence, you can completely automate REST API or website workflow. Also, HttpMaster can work as a universal HTTP tool. You can use it for testing HTML forms. Besides, it offers an easy-to-use interface and compact installation package. On top of that, it does not require you to have advanced technical skills. As a result, HttpMaster has become one of the best API test tools on the market.

Read: What Is an API Key?

Tricentis offers a suite of test automation tools. By using them, you can efficiently perform software testing. For example, you can utilize Tricentis Tosca for model-based test automation. It optimizes and accelerates end-to-end testing of your entire digital landscape. Tricentis Tosca is powered by AI. Hence, it can effectively take the bottlenecks out of testing. Overall, it is a good API testing tool.

Is It Very Important To Find The Best API Testing Tools?

The best API testing tools help you to automate the testing process. They can automatically identify the flaws in your code. Hence, they can help you to save a lot of time. The API test tools analyze the performance of your API. It helps you to ensure high reliability and security. That’s why it’s very important to find a trusted API testing tool. It can make your life a lot easier.

What tool is used for API testing?

Is REST API a tool?

Yes, REST API is a tool. It helps your apps to securely exchange information over the internet.

Is Selenium An API testing tool?

No, Selenium is not a tool for API testing. It is an open-source framework for automating test browsers.

Can we test API without Postman?

You can test API without postman by utilizing other test tools, like ReadyAPI and Katalon Studio.

Can JMeter be used for API testing?

Yes, you can use JMeter for API testing. It is a very popular tool. You can utilize it for performing functional API testing, load testing, and performance testing.

Apilayer offers a suite of API tools. They are very easy to integrate into web apps. Try them now for free by signing up here.